Syrah is one of the most popular grape varieties in the world. Its wines are typically full-bodied and powerful, with peppery and fruity flavors. Although we all know why we love this grape, the question remains: how did Syrah gain the prominence it currently holds in the international wine scene?

In Australia, Syrah is referred to as Shiraz. This has spurred several myths about its origin. Shiraz is a 4,000+ year-old city in Iran that is known for its wine. Indeed, the world’s oldest sample of wine, dating from a staggering 7,000 years ago, was discovered in clay pots near Shiraz.

The most common myth suggests that the Phocaeans brought Syrah from Shiraz to their colony in Marseille on the southeastern coast of France. From there, it gained popularity and began to move north, to the Rhone region of France. (The myth does not explain how the grape mysteriously disappeared from Marseille shortly afterwards!) Another variation on this myth attributes the grape’s origin to a French knight named Gaspard de Stérimberg, who participated in the crusades in the 1200s. He traveled to Persia (modern day Iran) and returned with the grape in tow. This also seems unlikely, as the crusaders certainly did not travel all the way to Persia! 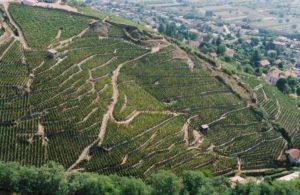 DNA testing by Dr. Carole Meredith, a geneticist who heads the Department of Viticulture and Enology at UC Davis revealed the truth about this beloved grape. It is a cross between two little-known varieties: Dureza and Mondeuse blanche. Dureza is grown exclusively in the Rhone region of France. Although it has been used historically because of its heartiness and high yields, Dureza has fallen out of favor in recent years. By 1988 only a single hectare (2.47 acres) of the grape was left growing. That’s as if the only Syrah on the planet was what we have on the Walla Faces Estate Vineyard! Dureza is also not on the list of allowed wines by the French AOC. Mondeuse blanche is similarly rare. A mere five hectares (12 acres) are left, all in the Savoy region of France.

Because of the parent grape varieties are both from a very small region in southeastern France, we can conclude that Syrah originated there as well, probably in northern Rhone. The exact time of the cross is not clear. Historical documents by the Roman naturalist Pliny the Elder suggest, however, that the cross may have occurred around 20 AD.

Although Syrah is clearly a very old variety, it wasn’t until the 1700s that it began really making a splash. In northeastern Rhone, there was a hill topped with a hermitage (a chapel) built by Gaspard de Stérimberg, the knight of legend. Hermitage wines, red blends made up primarily of Syrah grapes, were consumed worldwide. (They were a favorite of Thomas Jefferson!)

Syrah was brought to Australia by a Scotsman named James Busby in 1831, who collected a wide variety of grapes for the land down under. As a result, he has been dubbed “the father of Australian viticulture”. By the 1860s, Syrah was one of the most popular Australian varietals. Syrah first came to America in the 1970s. It was planted in California by wine-enthusiasts who called themselves the “Rhone rangers”. It finally made its way to Washington state in 1986– almost two thousand years after the grape was first crossed in France.

Syrah has even gone on to spawn its own offspring! An accidental cross-pollination between Peloursin and Syrah yielded Petite Sirah in a small vineyard in Tullins, France in the mid-1860s.

Now, Syrah has become one of the most popular grapes for wine production. At a staggering 142,600 hectares (352,000 acres) worldwide, it is the seventh most grown grape variety.