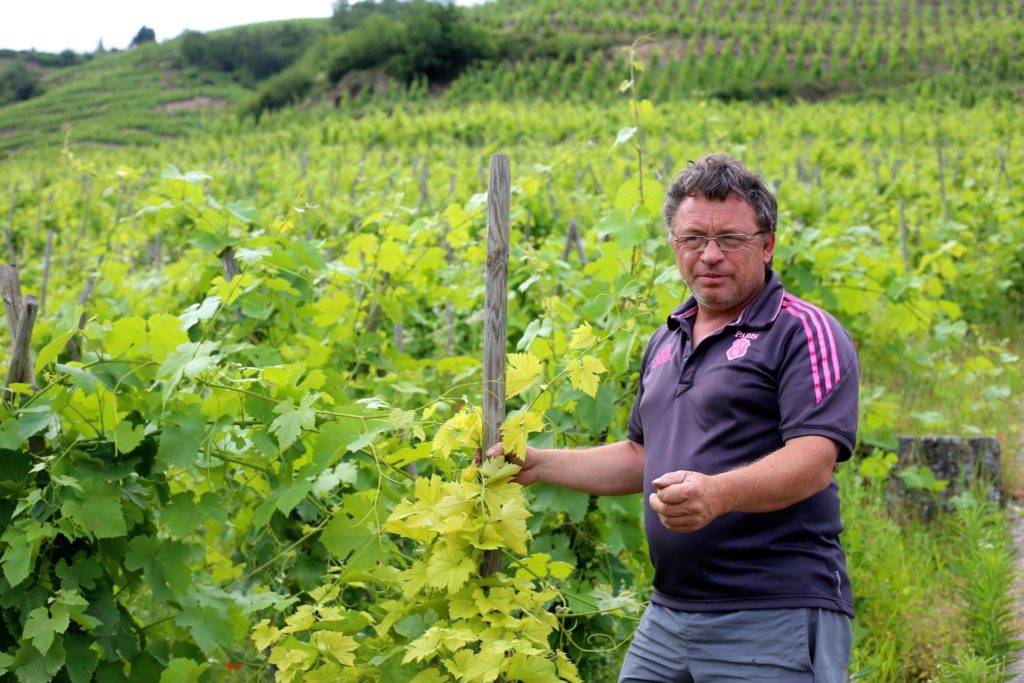 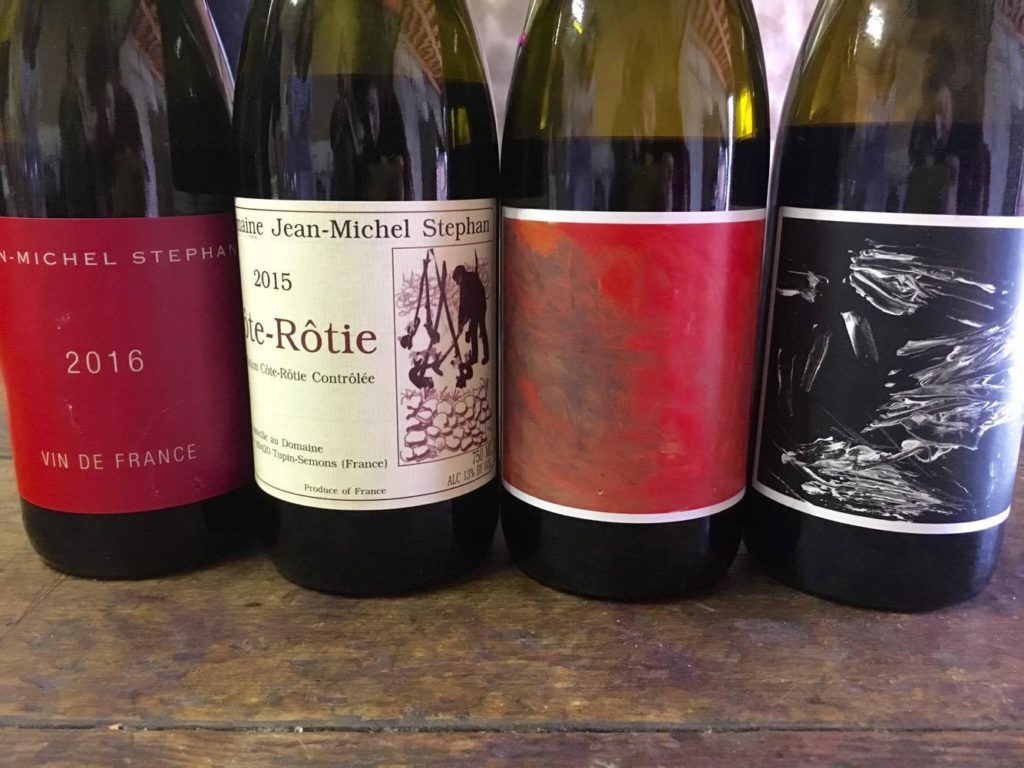 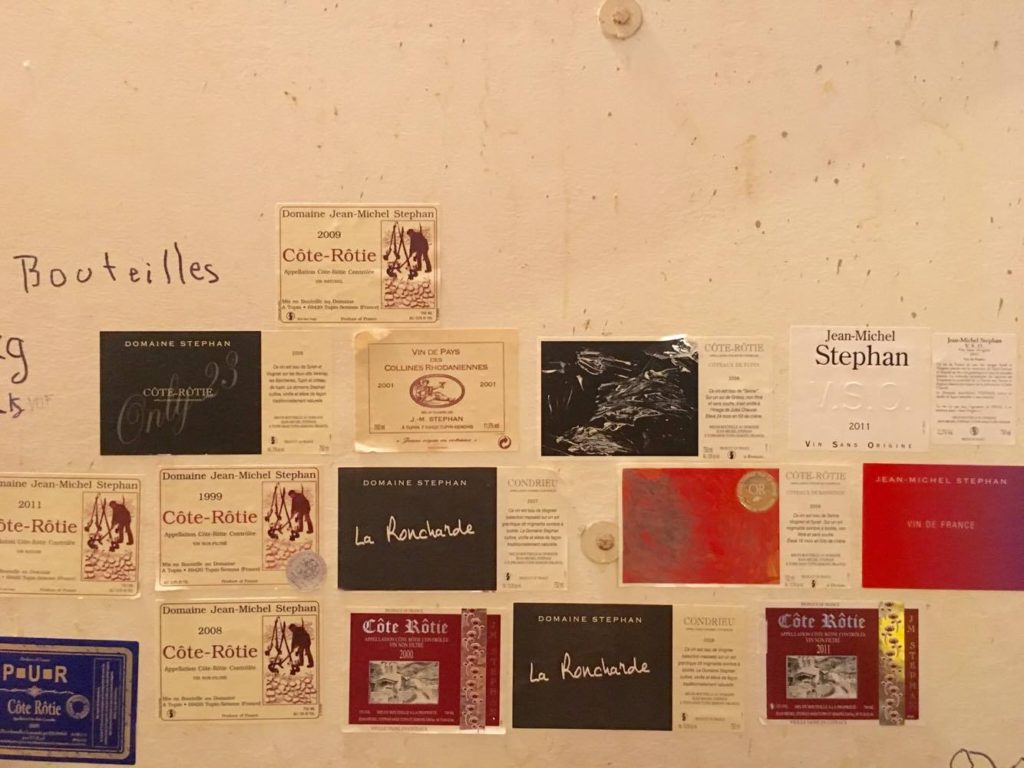 Jean-Michel Stephan’s cellar is located just off the main road in Tupin, south of Ampuis in Côte Rôtie.
Stephan is a first-generation vigneron and took over his father’s land in 1991 who was a tree grower. He planted his own vines and coddles together parcels ever since. He has now been joined by his son Romain, 18 and just graduated from a viticulture school in Beaujolais.
This small domaine has just added a 1.2-acre plot of Vin de Pays set to be planted to Viognier. Most of the vineyards (the domaine totals just under 15 acres) are around the town of Tupin, on weathered granite, with a small bit in Verenay to the north on schist. Production totals around 800 cases annually, with 10 percent coming to the U.S.
Winemaking here is simple, and Stephan has changed little over the years. Generally no sulphur is added (there have been exceptions) and immediately following malolactic conversion the wine is moved into barrel for aging, with time in barrel determined by cuvée. There is no new oak.

His largest holding is the 1.5 ha on the Coteau de Bassenon (Coteaux de Semons on the map); Bassenon is in fact a derivative of the term “Bas de Semons.” This is a 40° slope, with a lot of terraces cut into the soft granite or gneiss. The high part dates from 1987; the low part, of 0.87 ha, from 1896 and 1902.
His other sites are Tupin (1965), Coteaux de Tupin (1980), and the regular cuvée comes from part of Les Bercheries, and a tiny 0.3 ha up at Verenay (1992).
As someone who tries to be organic at every turn, Jean-Michel is planting massale-selection Serrine whenever possible. At present, his vineyard is around 60 per cent clone, 30 per cent Serrine, and 10 per cent Viognier; the last is also being regenerated, and at Verenay he has planted 500 young Viognier cuttings grafted from an old massale plant.
In vineyard upkeep, Jean-Michel picks the soil around the wood of the older vines and cuts the weeds on the surface.

– Jean-Michel Stephan 2016: 100% Syrah
– 2015 Côte-Rôtie: 10% Viognier 90% Syrah
Cofermented and aged for 12 months. This cuvée represents the vast majority of the production. “It delivers a beautifully pure beam of cassis with notes of singed iron, pepper and charcoal emerging through the finish. It’s silky in feel, but with a sauvage echo, a characteristic of all of Stephan’s wines..”
– 2015 Côte-Rôtie Coteaux de Bassenon 20 % Viognier, 40% Serine (from 5ha of 1896 old Serine vines), 40% Syrah
aged 24 months, delivers a gorgeous core of cassis fruit with background of bay, rosemary and charcoal note.
– 2015 Côte-Rôtie Coteaux de Tupin (100% Syrah and Serine) comes from 0.5 ha from the Coteau de Tupin, located above the estate, consisting of terraces on slopes of more than 50 °. Originating from serine planted in 1941, this cuvée offers a deep garnet color with purplish reflections.
The nose shows aromas of black fruits, blackcurrant, blackberry, violet and licorice.
The mouth, frank in attack, opens on an elegant material with presents but fines tannins . The aromatic expression is dominated by graphite notes, blackcurrant and pepper, bringing a right and elegant side to the wine.


::Côte Rôtie::
Prestigious red-wine appellation at the northern tip of France’s Rhône Valley wine region. The Syrah vines on its steep, south-east-facing slopes produce wines which are both powerful and elegant. Improvements in quality have led to increases in demand for the wines – a cycle which turned so consistently that Côte Rôtie wines are now some of France’s most sought-after and most expensive.

Situated immediately south of Vienne, the Côte Rôtie is the Rhone Valley’s northernmost appellation, and one of its smallest. The parishes of Ampuis, Saint-Cyr-sur-le-Rhone and Tupin-et-Semons are the only three that may produce Côte Rôtie wines, and even within the parishes, only certain plots qualify for the appellation.

The steep hillsides (côtes) here rise sharply from the banks of the River Rhone to heights of 1150ft (330m). They form 10 narrow ridges no more than 2000ft (600m) wide, each separated from the next by a narrow, tree-lined gully. The ridges run roughly north-east to south-west, providing the sun-baked aspects that help to make the appellation’s wines so rich and ripe. The very finest sites – the Côte Brune, Côte Blonde, La Mouline, La Landonne and La Turque – are those immediately above Ampuis town.