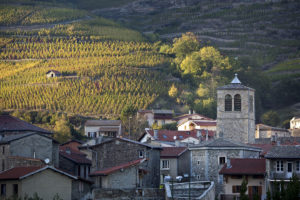 Lot of enthusiasm for the 2017 vintage between Vienne and Valence, with only a small loss of volumes. In the North of the Rhone Valley everyone is pleased with 2017 vintage. Though it can be said too loud, considering the situation faced by the Southern part of the Valley.
Philippe Guigal: “In Côte-Rôtie and Condrieu there is almost no loss, contrarily to Châteauneuf-du-Pape, probably facing 40-45% less volume this year.”
Same observation for Pierre Gaillard, very pleased with “the quality level and the absence of rot, despite a pretty low volume of Viognier and more Marsannes and Roussannes.”
Only few isolated plots suffered from frost but it’s still marginal.
Vidal Fleury, Guy Sarton du Jouchay consider “2017 unusual, similar to 2015 with less structure, but the wines promise to be more interesting in term of maturing capacity. Less tanins than 2015 and more acidity. And as we prefer long maturing we are quite optimistic.” He estimates a loss of 5% of volumes, around 15-20% for Crozes Hermitage with some area being more irregulars.

Overall harvests were quite concentrated with good sanitary condition and favorable weather forecast.

Nicolas Perrin welcomes a “wonderful month of September allowing a slow pace harvest, and the possibility to wait for the perfect maturity. Whites arrived at maturity quickly and whites Crozes Hermitage were picked from September 1st and 2nd. It was necessary to wait longer for Hermitage and Condrieu (between September 5th to 13th) to reach the desired ripeness stage.

For red grapes (announced early), harvest in Crozes lowland finally started only September 18th. Crozes Hermitage, Saint Joseph and Cornas happened at the same time (between 18th and 22nd). It required to be reactive and organised in order to have teams on different plots. 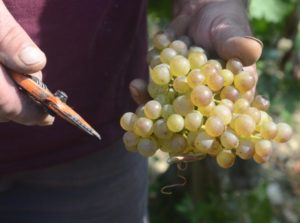 Nicolas Perrin announced already an exceptionnal vintage for Hermitage, a rare complexity for Cornas wines, with the depth of 2015 as well as solar character and balance of the 2016 vintage, characterized by elegance and smoothness for Crozes and Saint-Joseph.

Viognier doesn’t like hydric stress and will be more delicate to balance, probably with longer vinification.

At Tain cellar Xavier Gomard is very enthusiastic about the beautiful maturity and incredible sanitary state for Crozes Hermitage vineyard: “We could therefore take all our time to harvest and we started August 30th for the basic wines of Saint-Peray. We finished end of September.”

Finally the drought didn’t affect so much the vineyard, regular work on the soil helped to resist better. And we didn’t encounter any blockage of ripening, but sometimes grapes are a bit candied.”
Only a very localized area was hit by hail end of July in Saint Joseph, North of Tournon.
This good sanitary condition helped to launch a 0% sulfites vintage after a 2 years trial.
“Whites are surprising and very aromatic despite of the hot year. It’s a beautiful surprise, analysed Daniel Brissot, in charge of Tain Cellar vineyard. Reds, even if we record 20% less of volumes compared with 2016, will benefit of excellent maturity. But unlike 2009 and 2015 they will not show too aggressive tannins.

It will be a really great vintage!”