We know a surprising amount today about the drinking habits of the Avignon Popes, who promoted wine-growing in the Rhône area, most famously around Châteauneuf du Pape.
Each pontiff had very particular tastes. And they and their entourages quaffed prodigious amounts of the stuff, judging by the accounts of the apostolic chamber.
Apparently in the course of a normal week, over 10,000 litres of wine were consumed by the papal entourage, 1,000 litres at the Pope’s table alone.
Elsewhere, the accounts estimate wine consumption in the Palace at two and a half litres per person per day.
And that was nothing compared to major feasts. When Clement VI – the bon vivant of the Avignon Popes – was coronated in 1342, 160,000 litres of wine were drunk in the Palais des Papes alone, and wine fountains flowed freely in the city itself for four weeks.
The wine was not always of the finest quality and did not keep for long. The bottlers added spices to disguise the taste and help preserve it, and the Popes would sip this brew in their chambers for medicinal purposes.
Around 16 people worked in the papal cellars: three or four bottlers, a dozen assistants and a scribe thanks, presumably, to whom we know all of the above. 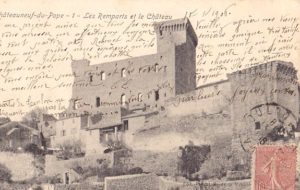 The wines on the menu at the Palais des Papes:

Vines were already being enthusiastically cultivated by clergy in the area well before the first Avignon Pope, Clement V, arrived there in 1309.
Monks had cleared land and created vineyards along the banks of the Rhône river north of Avignon and in 1157, Geoffroy, the Bishop of Avignon, set up his own personal estate in Châteauneuf, then known as Calcenier.
By the 13th century the village, with its 1000 inhabitants, had grown rich and developed a flourishing vineyard of approximately 300 hectares / 740 acres.
Clement V was formerly Archbishop of Bordeaux before becoming Pope and relocating the papacy to Avignon. As plain Bertrand de Goth, he already owned a plot of land in Pessac, near Bordeaux which he had planted with vines in 1300.
The oldest vineyard in Bordeaux, it’s today called Château Pape Clément in his honour, producing a prized grand cru classé wine.
After becoming Pope, Clement V initially continued to prefer claret but, on arriving in Avignon, planted a vineyard there near Châteauneuf. 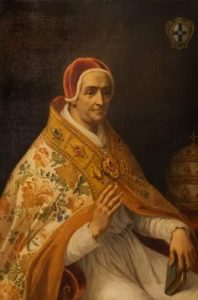 Clement V’s successor, John XXII, was more partial to a drop of Burgundy, but also encouraged local wine production. It was he who built the castle at Châteauneuf du Pape (the name means, literally, “the Pope’s new castle”) to escape the oppressive summer heat in Avignon.
A vineyard was planted there in 1317 and under his papacy the term Vin du Pape was coined. The Château itself (pictured above) was destroyed during the Second World War, but the ruins still dominate the surrounding countryside.
And there’s more: the story goes that, while visiting the small town of Valréas in what’s now Northern Provence, Pope John fell ill and was given some local Côtes du Rhône wine to perk him up.
It worked. So much so that the Pope bought Valréas to ensure a regular supply.
His successors added more territory including nearby villages such as Richerenches and Visan. To this day the area is known as the Enclave des Papes.
The severe Pope Benedict XII served only local wines from the right bank of the Rhône at his table. Nonetheless the poet Francesco Petrarch rudely described him as an “inveterate drunkard”.
His successor, Clement VI, intended to pull out the stops during his papacy. For his coronation, he ordered 15 barrels of muscat wine from the Languedoc and Toulon and another 24 barrels from Burgundy.
He was happy to drink provençal wine, wine from Poitou, Rhone wine and Ligurian wine, not forgetting all the other wines his predecessors had enjoyed. Just about anything really, it seems. He died in 1352 of renal failure.
One of the first thing Innocent VI did, upon becoming Pope, was to change the date of a religious procession so as not to disturb the grape harvest. A relatively abstemious man, he preferred local wines, especially red and Châteauneuf du Pape.
Urban V hoped to bring the papacy back to Rome, but ran up against one serious obstacle. According to Petrarch, his cardinals refused to accompany him because they had become too fond of the Beaune wines they’d been drinking in France.
“They did not believe they could lead a happy life without this liquor,” Petrarch wrote. “They regarded this wine as a nectar of the gods.”
When Urban V did return to Italy for two years, he made sure to strike a deal first with the Doge of Venice, so that he could import French wines via the Venetian port to keep his team contented. He also planted vineyards around Rome to ensure a supply of quality wines. 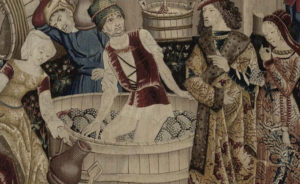 Back in Avignon, Urban V discovered a taste for the wines and preserved fruits of Apt, and also developed the Châteauneuf vineyard by ordering it to be planted with muscat grapes.
The last of the official Avignon Popes, Gregory XI remained loyal to the muscat grape and the wines of Apt.
Ecclesiastical records suggest that a promotion to cardinal or a stay of an excommunication could be secured by offering the Pope a particularly fine vintage. He too died of renal failure.
After the return of the papacy to Rome, the pontiffs there managed to import wine from Provence. Meanwhile back in Avignon, the anti-popes were continuing to enjoy the local wines and the first of these, Clement VII, broadened his repertoire, ordering 95 barrels of sweet Greek wine from Rhodes.
Benedict XIII, the second and last of the Avignon anti-popes, came from Spanish Catalonia and favoured wines from French Catalonia.
In 1395 talks were held to heal the papal schism and barrels of fine Beaune wine were brought in to lubricate the discussion.
Alas the wine was corked, the talks broke down and Benedict eventually slunk back to Spain, the schism unmended.